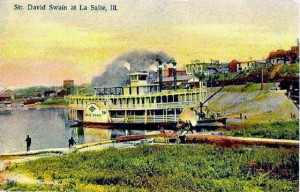 On October 16th in 1831, the “Traveler” became the first steamboat to reach LaSalle-Peru coming up the Illinois River. This is a few months before the Black Hawk War and five years before the canal begins construction. Indeed the canal was needed as steamboats could rarely go beyond Utica. “Traveler” was owned by Captain Abraham Kimber, previously a glassmaker from Pennsylvania. His son Isaac’s boat, “The Garden City” made the record between St. Louis to LaSalle in 21 hours, 55 minutes. The trip had previously taken five days.