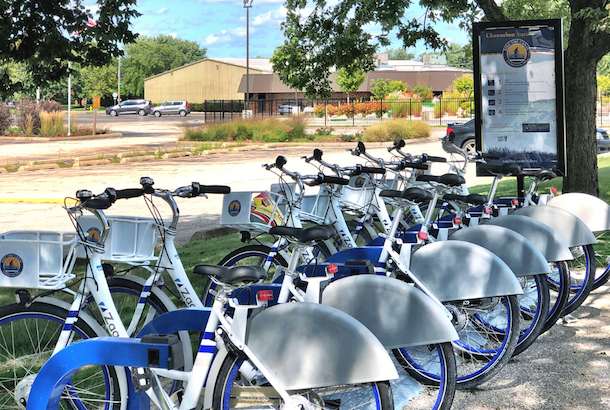 Recall the sounds of the forest as you walk along a favorite path: birds calling among pastel hues of springtime, crickets chirping while hidden in the deep greens of summer, fall’s festival of colors as gold and russet leaves fall and crunch underfoot, and the still silence of winter’s soft snows glittering in sunlight.

When you are ready for a bit of that peace again, consider exploring the many trails in Channahon, Illinois. Moments like these are only minutes from any point in the community, according to Village President, Missey Moorman Schumacher.

Channahon was the local Potawatomi word for “meeting of the waters,” Schumacher said. This picturesque village is just off of I-55, a little south of I-80, between Joliet and Morris, and follows the junctures of four waterways. There, the DuPage River flows into the DesPlaines. Just beyond that, the Kankakee River also flows into the DesPlaines, and their confluence forms the larger Illinois River.

Because of the area’s historic topography, a lock and locktender’s house was built for the I&M Canal where it is close to the DuPage River, in what is now Channahon State Park. The head of a 62 mile restored section of the canal’s original 96 mile towpath begins nearby. It is known as the I&M Canal State Trail.

This section of the trail follows the waterways south and west to LaSalle where the canal met the Illinois River, at which point the river could finally support barge traffic on the rest of its way to the Mississippi. In addition to the rivers, with boating, kayaking, fishing and associated activities, they also have a number of hiking and biking trails and paths, and camping areas.

An ardent nature lover, Schumacher knows the trails and waterways well. “I run almost daily, and I run on the I&M Canal State Trail regularly,” she said. “It’s beautiful.”

“We also have McKinley Forest Preserve, which has trails and paths, plus the Four Rivers Environmental Education Center, and programs to get people out to enjoy it all,” she said.

“With so much wildlife out here, people come from everywhere, especially photographers, because there is a significant amount of birdwatching. White pelicans migrate through here and we have many bird species, including swans and Bald Eagles. We also have many animals including deer, coyotes, fox, and more,” she said.

“I’ve long been a proponent of connecting our entire trail system,” Schumacher said. “We want to be a recreational area. Ultimately, whether it’s people who live here or tourists, my goal is to be able to get all over Channahon via bicycle, walking, or running, without getting in a car.”

With good community support, they have been working on connecting their trails for several years now. In addition, they are working with Minooka and other areas to connect trails as part of developing a larger regional trail system, she said.

“For her efforts in leading the Village’s commitment to develop a trail system throughout the community, plus linking to Illinois’ largest regional trail system and the I&M Canal State Trail, Missey Moorman Schumacher will be honored at the Canal Boat Captain’s Luncheon,” said Ana B. Koval, President CEO  Canal Corridor Association.

“I think Channahon is well on its way to becoming a significant part of the trail system,” Koval added. “They were one of the original towns to participate in the I&M Canal bike share program, and I think using their asset of being just off I-55 as a way of attracting people for recreation along the canal is significant too.”

As they link their trails, Schumacher hopes countless people will be able to connect to miles and miles of unspoiled land and enjoy each season and what it has to bring.