The I&M Canal was the final link in a national plan to connect different regions of the vast North American continent via waterways. Linking the waters of the Illinois River (and ultimately the Mississippi River) with those of Lake Michigan, the idea of the canal went back to Louis Jolliet and the early French fur traders of the 1670s.

The years between 1800 and 1850 have been characterized as the Canal Era in U. S. history. Since the birth of the new nation, American leaders recognized the urgent need for a network of internal improvements to ease the problem of continental transportation. The success of the Erie Canal, completed in 1825, marked a period of intensive canal building in the U. S. This chapter in our nation’s history has been largely overlooked, as most historians have focused on the railroads as the prime force behind America’s economic development. 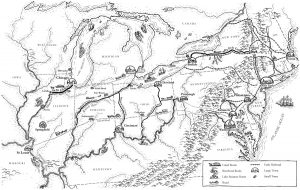 Construction of the I&M Canal and the sale of canal lands brought thousands of people streaming into northeastern Illinois in the mid to late 1830s, and those who braved the hazards of this frontier outpost quickly realized the necessity of improving transportation. Contemporary accounts of stagecoach travel emphasize the perils and discomforts of traversing rutted paths that passed for roads. Much of the region consisted of wet prairie, and spring rains and melting snow turned the trails into quagmires.

In 1847, a reporter took a trip by stagecoach along the route of the soon to be completed I&M Canal. He noted that the ride “was as uncomfortable as any enemy, if we had one, could desire. They made progress at the rate of less than three miles an hour; the weather was intensely hot; and not a breath of air was stirring; the horses and carriage raised any quantity of dust, which, of course, rose only high enough to fill the carriage.” Another traveler noted that a long stagecoach ride “left one more dead than alive.” Canal travel promised a new level of comfort and convenience.

Few events in Chicago’s history were more eagerly anticipated than the opening of the Illinois and Michigan Canal. The digging of the most massive public works project ever attempted in the young state of Illinois, digging began on July 4, 1836. Many hoped the canal could be completed in a few years, but in 1837 the nation suffered its first major depression, and by 1840, Illinois teetered toward bankruptcy. Work on the canal largely ceased until New York, English, and French financiers invested $1.6 million to jump-start the stalled project in 1845. It took 12 years of on-again, off-again labor to construct the canal, which finally opened in April of 1848.