Join us on Sunday April 15th, 1:00pm -2:30pm for our Sunday Lecture Series: “Illinois Memoirs: Our Story, Your Opportunity” with speaker John Hallwas at the Lock 16 Cafe & Visitor Center in LaSalle. 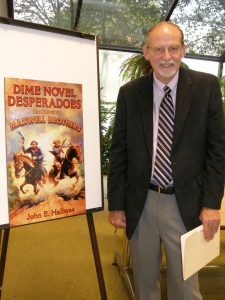 Illinois’s monumental literary heritage is particularly rich in autobiographies and memoirs, including the first noted autobiography from the Midwest, Chief Black Hawk’s, the most famous memoir associated with the Civil War, Ulysses S. Grant’s, and one of the most celebrated autobiographies by an American woman, Jane Addams’s Twenty Years at Hull House, among many others. Such works often address issues of identity and belonging, which are as crucial today as ever. Because of the rapidity of cultural change, personal accounts that offer perspectives on life in particular places, families, communities, and occupations at various points in the past, even the recent past, are increasingly valuable.

Speaker John E. Hallwas is Distinguished Professor Emeritus at Western Illinois University. An historian as well as a literary scholar, he has written or edited twenty-eight books related to the Midwest, including titles like Western Illinois Heritage (1984), Illinois Literature: The Nineteenth Century (1986), Spoon River Anthology: An Annotated Edition (1992), Cultures in Conflict: A Documentary History of the Mormon War in Illinois (1996, with Roger Launius), The Bootlegger: A Story of Small-Town America (1998), Keokuk and the Great Dam (2001), and Dime Novel Desperadoes: The Notorious Maxwell Brothers (2008). He has also written dozens of scholarly articles on Illinois literature and history, as well as hundreds of newspaper and magazine articles, plus several history-focused plays.