On this day 168 years ago, then Whig Congressman, Abraham Lincoln, wife Mary and their kids Robert and Eddie boarded a packet boat in Chicago and arrived in LaSalle the day after to board a steamboat. Abraham Lincoln supported the construction of the canal and made this first trip along the I&M in 1848, the first year the canal was in operation. 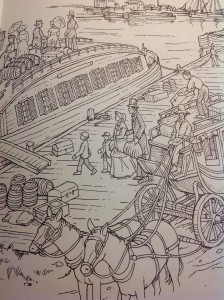 Abraham Lincoln advocated for improvements to the nation’s transportation network, including a canal system that would be tied to the harbors, rivers, and roadways of America. This was because Lincoln believed that the waterways held the key to success and believed that the I&M Canal would promote settlement and growth of Illinois. As a legislator, an attorney, and the President of the United States, Lincoln actively supported the construction, use, and expansion of the Illinois & Michigan Canal.