On Friday, October 9th, a group of canal enthusiasts, history buffs, and curious passerbys gathered at the corner of First and Joliet Streets in downtown La Salle to witness the unveiling of the Canal Corridor Association’s 45th Cor-Ten steel silhouette of historic figures along the I&M Canal from Hodgkins to La Salle. 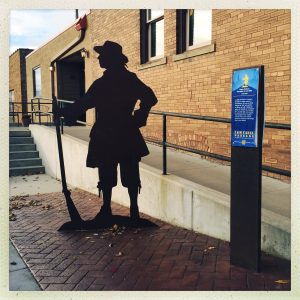 Standing next to the 6 foot tall, cloaked silhouette of Rene-Robert Cavelier, Sieur de la Salle, Ana B. Koval, President of the Canal Corridor Association shared the CCA’s silhouette program with the group.

Charles J. Balesi, French representative, gave a short history of La Salle’s impact on the Midwest. La Salle was a visionary, who wanted to colonized the Mississippi basin. Pursuing his dream took him decades while he built an infrastructure of forts, trade routes, and Native American alliances from Niagara to Illinois Country, stretching well beyond the French frontier. He established a fur-trading empire centered on Starved Rock and later claimed the watershed of the Mississippi for France in defiance of the Spanish.

Mayor Jeff Grove, of the City of La Salle, remarked that he is proud of the tradition of “visionaries” his community continues. Following, Ana Koval and Mayor Grove unveiled the silhouette of the City’s namesake.

Rene-Robert Cavelier, Sieur de La Salle dreamed of colonizing the American heartland. Though not the first Frenchman in the area, he explored the area in 1680. He later built Fort St. Louis atop Starved Rock and established a fur trading empire in Illinois Country. Later he journeyed down the Mississippi River and claimed its watershed for the French in defiance of the Spanish. He is one of the most dynamic characters to have passed through Illinois. 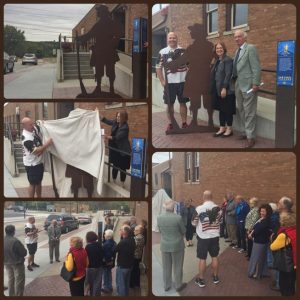