Dinner & a Little History: Businesses of the Illinois Valley

Join us for dinner as historian John Piano shares the remarkable rise of the Illinois Valley from the late 1600s up through the Industrial Age. The program will focus on people of the Illinois Valley that changed the world for the better. The program will include The United Clock Co. later Westclox, and how it started in the back of a store called Brylski’s and then proceeded to grow into the largest time corporation in the world. It will also detail how La Salle-Peru developed the quartz time movement and the first automated line in the world and became the envy of industry worldwide.

John Piano, a local historian who has lived in La Salle, Peru, and Oglesby. He attended Palmer College of Chiropractic – BS, received his Doctor of Chiropractic Degree, and practiced in Oglesby: 1998-2013. He is the co-author of the centennial Oglesby book, which won the Governor’s Award. John grew up next to Frederick Matthiessen’s country estate and spent many enjoyable hours in the abandoned 3-story, 56 room mansion. He has been involved in the Hegeler Carus Foundation and served on their board of directors until 2013. He currently resides in LaSalle with his wife, Christina, and daughters Marisa and Regina. 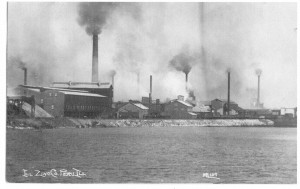