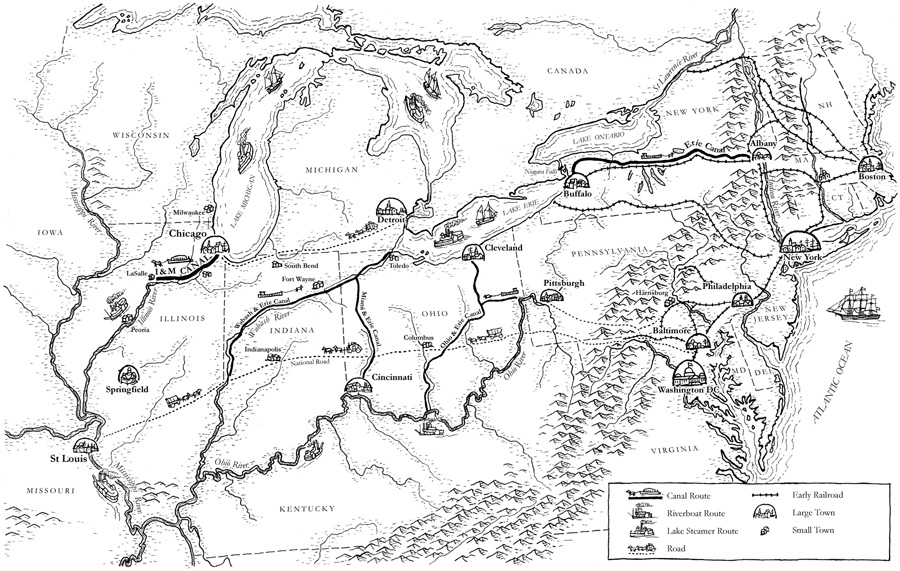 On its completion, the I&M Canal created a new transportation corridor. By connecting the waters of the Illinois River with those of Lake Michigan, a vast all-water route connected widely scattered sections of the United States, specifically the Northwest, South, and East. Travelers from the eastern U. S. took the Erie Canal to Buffalo, New York, where steamboats brought them through the Great Lakes to Chicago. Transferring to canal boats, a 96-mile trip on the I&M Canal brought them to LaSalle/Peru. Here people boarded river steamers bound for St. Louis and New Orleans. The canal opened the floodgates to an influx of new commodities, new people, and new ideas.

The I&M Canal, and the railroad and highway connections that soon paralleled its path between Chicago and LaSalle/Peru, became the great passageway to the American West. The opening of the Illinois and Michigan Canal in 1848 made Chicago and northern Illinois the key crossroads of the American mid-continent. The opening of the canal heralded a new era in trade and travel for the entire nation. The I&M Canal allowed travelers the option of taking an all-water route from New York Harbor to Chicago, Illinois, to St. Louis, Missouri and even to New Orleans, Louisiana. This water highway provided a mud and dust-free alternative to overland travel. Passengers increasingly chose the all water route to the West, bypassing the Ohio River route. Freight could go from St. Louis to New York in 12 days via the I&M Canal and the Great Lakes, while the Ohio River route might take 30-40 days.

Packet boat companies touted their role in a new transportation network by noting that the packets connected with a daily line of steamboats bound for St. Louis, enabling travelers to make the 400-mile trip between Chicago and St. Louis in 60-72 hours, at a cost of only $9. One commentator estimated that the number of people traveling from Chicago to St. Louis had tripled since the packet boats began running.

The I&M Canal and the Making of Chicago

Chicago’s rapid development in the nineteenth century is regarded as one of the most remarkable stories in American history, yet few today make a connection between this unprecedented growth and the Illinois and Michigan Canal. The last of the great U.S. shipping canals, the I&M Canal helped transform Chicago from a small frontier town to the fastest growing city on earth. The canal also siphoned off trade from St. Louis, one of the factors that allowed Chicago to surge ahead of its chief commercial rival. St. Louis and others had laid claim to the title of “Queen City” of the West: Chicago solidified its claim through the changes wrought by the I&M Canal. The I&M Canal was the first of the region’s transportation systems; all others followed in its wake.

Understanding the story of the I&M Canal is critical for understanding the incredibly rapid development of Chicago and Northeastern Illinois in the nineteenth century. The first few years of the I&M Canal were critical in launching Chicago on its path to urban greatness, and in spawning a dozen other towns along its banks that would soon industrialize and help consolidate the western end of the American Manufacturing Belt in northern Illinois. The opening of the Illinois & Michigan Canal radically reduced the costs of transferring goods, particularly grain, lumber, and merchandise, between Midwestern prairies and the East via the Great Lakes trading system. The degree to which the I&M Canal forever altered life in Chicago cannot be overstated. For the first time, the canal allowed goods from the southern U. S., including sugar, salt, molasses, tobacco, and oranges, to be shipped to Chicago. By cutting travel times, the I&M Canal also precipitated a new era of travel for people between the south to the north.

Changes Wrought by the Canal

Figure 2.4. Steamboat
Passengers traveling on the Illinois & Michigan Canal could transfer to steam boats to continue their journeys at both the western and eastern termini. (Tom Willcockson, © Canal Corridor Association)

The I&M Canal’s influence reached its peak during 1848-1852, when it had no serious rival as a major artery of commerce in northeastern Illinois. Many people mistakenly believe that the construction of railroads in the early 1850s ended the use of the canal as a transportation artery. Indeed, by 1853, when the Chicago, Rock Island and Pacific Railroad paralleled the canal, the brief and colorful days of the I&M canal packet (passenger) boats were over. But freight traffic on the canal continued to increase through the 1880s. The I&M Canal remained open for traffic for 85 years, of which only the last 33 were a time of steady decline until traffic was but a mere trickle. The existence of the canal as an alternative shipping route forced railroads to keep rates down on bulk goods, to the benefit of consumers everywhere. With the exception of the Erie Canal, only the I&M Canal opened up a water transportation corridor still viable today. This nationally important water corridor today consists of the Sanitary and Ship Canal and the Illinois Waterway, which eventually supplanted the I&M Canal in 1933.

The results of the canal in the Midwest were profound. Farmers now had a reliable way to get their crops to market, thus allowing them to open up new acreage for cultivation. The mining of limestone, coal, sand, and gravel shifted into high gear, as the canal made it economically feasible to quarry and ship large quantities to fast growing Chicago. Exploiting these natural resources in turn spurred new industries, especially the manufacture of glass, bricks, hydraulic cement, and zinc.

Abraham Lincoln and the I&M Canal

Throughout his public life, Abraham Lincoln advocated for improvements to the nation’s transportation network, including a canal system that would be tied to the harbors, rivers, and roadways of America. He believed the waterways held the key to success, advancing the economic development of his home state and the entire nation. As a legislator, an attorney, and the President of the United States, Lincoln actively supported the construction, use, and expansion of the Illinois & Michigan Canal.

While serving in the Illinois General Assembly, Representative Abraham Lincoln and eight of his colleagues addressed the slow development of northeastern Illinois. Some historians argue that legislators from Sangamon County, known as “the Long Nine” because of their height, swapped votes with northern legislators. In this act of “horse trading,” the Long Nine would lobby for the construction of the Illinois & Michigan Canal in exchange for northern legislators’ support of the capitol’s move to Springfield. Given his experiences on the rivers, Lincoln was receptive to the idea of a canal that would connect the Great Lakes to the Gulf of Mexico through northeastern Illinois.

In February of 1835, Lincoln and 39 of his House colleagues voted to approve the construction of the I&M Canal, but funding problems ensued. Lincoln offered two amendments that were ultimately included in the authorizing legislation that passed in January of 1836. One of his proposals reduced the number of Canal Commissioners from five to three, and the other permitted the Governor to remove a Commissioner “for good cause.” As a lawyer in private practice, Abraham Lincoln remained involved in the affairs of the I&M Canal.

During the summer of 1852, the Illinois General Assembly appointed Lincoln, along with Hugh Dickey and Noah Johnston, to a special commission. The commission’s task was to gather information about claims against the state resulting from the construction and operation of the I&M Canal. Lincoln and the other special commissioners traveled along the canal and interviewed claimants and witnesses in the Cook, Will, and LaSalle county courthouses. By the end of the year, they submitted a report to the Governor. As President of the United States, Abraham Lincoln’s goal was to preserve the Union. He advocated for improvements to the nation’s transportation system in order to move troops and supplies.

Since the Confederacy blocked the lower Mississippi River, more freight and passengers traveled through Illinois. In his annual messages to Congress in 1861 and 1862, Lincoln specifically included improvements to the I&M Canal. The proposed canal enlargement would have allowed warships to travel between the Great Lakes and the Mississippi River. It also would have permitted a greater amount of freight to be shipped through the canal between the upper Mississippi River region and the eastern United States. Congress did not approve the project, but Lincoln’s proposal laid the foundation for the construction of the Illinois Waterway System.

During his lifetime, Lincoln was honored on the I&M canal for his many efforts and accomplishments. No less than three canal boats used his moniker. The first was the Rail Splitter from Morris, which began its voyages in 1860. The following year, Old Abe out of Joliet and A. Lincoln from Morris joined the flotilla of canal boats.

A Story with National and International Significance

The I&M Canal had significant implications not only for Illinois, but for the entire nation. In 1827, the Federal Government gave the state of Illinois nearly 300,000 acres of prime farmland, the sale of which would finance construction of a canal. The I&M Canal shares with the Wabash Canal in neighboring Indiana the distinction of being the first American canal to receive a federal land grant toward its financing. This precedent is of great historical importance, as it later served as the model for the first federal land grant to support a railroad—the Illinois Central Railroad.

The canal story is also one with international implications. In 1845, with construction of the I&M Canal stalled due to the state of Illinois’s near bankruptcy, investors from New York, England, and France put up $1.6 million to complete the canal. The investors were not disappointed in their returns, and the I&M Canal is one of the few American canals to have more than paid for its construction and operation.